Bring my play Dear Anita Bryant: The Play  to your school or community theater!

Dear Anita Bryant: The Play is a one-act readers’ theater play, both dramatic and humorous, that shares the challenges of pain and the power of forgiveness as it tells stories of LGBTQ history. 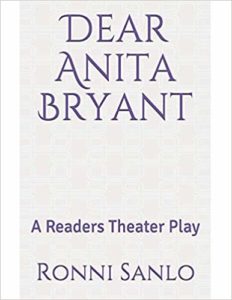 In 1977 singer Anita Bryant kicked off her anti-gay work in an effort to repeal Miami’s new non-discrimination ordinance. Successful, Bryant took that campaign across the country. The next year the Florida legislature ruled that lesbians and gay men were not fit parents. In 1979, Ronni Sanlo came out as a lesbian and lost custody of her two young children. Years later, she wrote a letter to Anita Bryant. Dear Anita Bryant: The Play is a memoir, a true story that took place in the 1970s and 80s with a wide arc and an extremely relevant anchor. It makes the audience ache, despair and rejoice then ache again in waves with moments very familiar to each one of us who grew up during those years. And in the most unique moment at the end, the audience is brought to a place of forgiveness… the ending we all need.

The 8.5 x 11 script book is available on Amazon. Click here. Included is both the 60-minute one-act Readers Theater play as well as the 35-minute Youth Readers Theater Play

Minimum of six cast members; more may be added as needed by dividing the characters’ roles.