I’ve been asked how The Soldier, the Avatar, and the Holocaust came about. My father wrote over 500 letters to my mother when he was a young newly-married soldier in 1944-1946. I didn’t know that my mother had kept every one of them for all these decades. One day she showed them to my sisters Sherry and Barbra and me. We read every one of them, mesmerized by the history that was bouncing off pages before our eyes. I knew I needed to write that story, my father’s story. I also knew I needed to focus on the last five months of WWII because that was when he was fighting.

The story was enticing to me but in writing it, I was beginning to bore myself. I needed something different, a new way of telling this story. I saw three films that touched me and changed the way I thought about this story. The first was Sarah’s Key which was about young people in the war. The second was Midnight in Paris about seamless and unexplained time-travel. The third, of course, was Avatars. An idea began to emerge….and so did this book.

The Soldier, the Avatar, and the Holocaust is still in pre-publication sales. It will be available on Amazon and Kindle later in September, after the launch event at the annual reunion of the 42nd Rainbow Division in New York. Order now HERE and receive a personally autographed book, a free Reader’s Guide, and free shipping. 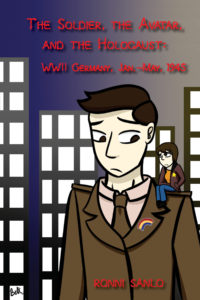 In the meantime, remember…and tell.