A Conversation with Dr. Ronni Sanlo

My name is Smitty (they/them/theirs), and I am the Writer/Photographer Student Lead for the IGR, MESA, and Spectrum Center units here at the University of Michigan. On April 30th, Spectrum Center held its annual Lavender Graduation (LavGrad) online. LavGrad is a ceremony that was created by Ronni Sanlo (she/her/hers) in 1995 at the University that celebrates LGBTQ+ graduate students and their achievements. Over the past 25 years, LavGrad has expanded to other institutions — more than 500 colleges, universities, and even high schools — across the country.

Sanlo has done incredible social justice work for years, fueled by the obstacles she has faced in her own life. This year, Ronni Sanlo is Michigan’s LavGrad keynote speaker for the 25th anniversary of the creation of the ceremony. Sanlo was also the recipient of an Honorary Lavender Degree and had the graduation Cornerstone Award named after her.

I had a conversation with Sanlo virtually to get to know more about her and her achievements.

Lavender Graduation is an annual commencement ceremony conducted at universities and more recently high schools to honor LGBTQ students and to acknowledge their lives and achievements.
Read more… 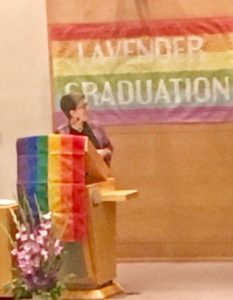 I created Lavender Graduation for two reasons: first, I wasn’t invited to my chidlren’s graduation becasue of my sexual orientation. Second, LGBTQ students were telling me that their lives were miserable on campus and they coudln’t wait to get out. I wanted their last taste of their college experience to be positive, to remind them that they and their scholarshi-p mattered to the academy.

The first Lavender Graduation took place at the University of Michigan in 1995 with three graduates. Today, over 500 colleges and universities offer lavender graduation ceremonies for their students.

I have had the honor of presenting the keynote address at Lavender Graduations around the country. Some of those locations include: